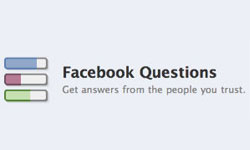 Facebook has removed the Questions feature from users’ News Feed publisher, leaving the product only available to groups and pages.

Questions has gone through a number of iterations, never quite catching on as the social network envisioned. It began in 2010 as a Q&A community, similar to Quora, but that product didn’t even make it out of beta. The company overhauled Questions and relaunched it as a type of polling and recommendation feature in 2011, focusing on users’ opinions rather than facts.

Ultimately, Questions turned out to be more of a novelty feature than a utility and the company subsequently put little development into it. It was nearly a year after the product launched that Facebook even made it possible to see and answer questions from mobile devices. Users never gained a way to ask questions via mobile.

The product did take off more among page owners. Marketers found success in asking Questions in a format that users could quickly answer. And since they generated News Feed stories when users answered them, Questions could go viral, especially when they first launched and had higher weight in the feed. For now, pages still have the option to create Questions, albeit behind a drop-down menu where they’ve been since April. In August, we saw Facebook testing a new, more visual format for the feature. We wonder whether this may become a paid feature similar to Offers and perhaps Collections.

Facebook has also left Questions in tact for groups and events, suggesting that the feature has been useful for helping small groups of people make decisions together.

When it launched, Questions seemed like it could be an interesting social plugin for blogs and news sites to get feedback and engagement from readers, but Facebook never offered this. In fact, it didn’t even add the ability to write Questions via the Graph API until 10 months after launch.

This website uses cookies to improve your experience while you navigate through the website. Out of these, the cookies that are categorized as necessary are stored on your browser as they are essential for the working of basic functionalities of the website. We also use third-party cookies that help us analyze and understand how you use this website. These cookies will be stored in your browser only with your consent. You also have the option to opt-out of these cookies. But opting out of some of these cookies may affect your browsing experience.
Necessary Always Enabled

Any cookies that may not be particularly necessary for the website to function and is used specifically to collect user personal data via analytics, ads, other embedded contents are termed as non-necessary cookies. It is mandatory to procure user consent prior to running these cookies on your website.